THIS WEEKEND ONLY: COMPETE FOR £10,000 WITH YOUR FANTASY TEAM IN THE GRAND JANUARY FANTASY TOURNAMENT!

Here at FantasyBet, we continue to offer you the chance to win big every gameweek, with the £10,000 guaranteed Grand January taking place this weekend, where you can compete for a share of the jackpot for just a £33 entry!

Picking the right combination of players could really help flush away those January blues, so we take a look at the bookmakers’ odds from across the internet, analysing the relevant clean sheet and anytime goalscorer markets for Gameweek 23 in order to give you that all important edge over your rivals…

The Grand January: Compete for £10,000 with your fantasy team💰THIS WEEKEND ONLY!

The fact that the worst home attack, Huddersfield (5 goals scored), takes on the joint-best away defence, Manchester City (7 goals conceded), on Sunday sees Pep Guardiola’s side top the bookies’ defensive rankings with a 62% chance of keeping a clean sheet. The Citizens haven’t conceded in their last 3 games in all competitions, whilst the Terriers, who parted company with David Wagner this week, have blanked in 3 of their last 4. We plump for the services of Aymeric Laporte, who continues to offer the best starting security from the City back line.

Liverpool (56%) rank second ahead of their hosting of Crystal Palace. The Reds have the tightest defence in the top flight this season, and have only been breach 3 times in 10 games at Anfield. They also managed to shut out the Eagles in the reverse fixture back in August, winning 2-0 at Selhurst Park. Andy Robertson is the highest scoring defender in the game (124 points), has chalked up 5 assists and accrued more bonus points (19) than any other player bar Pierre-Emerick Aubameyang. The Scotland captain starts for our side this weekend.

Manchester United (53%) and Watford (43%) complete the top 4 defensive prospects for Gameweek 23. The Red Devils continued their renaissance under Ole Gunnar Solskjaer with a 1-0 victory away to Tottenham last time out, their third shutout in succession. On Saturday they entertain a Brighton side who have failed to score in 2 of their last 3 on the road. Watford, meanwhile, welcome Burnley, who are averaging less than a goal per game on their travels this term (9 scored in 11 matches), to Vicarage Road. Luke Shaw and Ben Foster provide the best value routes into their respective defences and make our starting XI.

On our bench, David Button (10%) offers us a £4.0m goalkeeping option for a few weeks with Mat Ryan at the Asian Cup, whilst Ryan Bennett (40%) and Jan Bednarek (29%) provide superb options in defence at the same price point. This gameweek they host Leicester and Everton respectively.

The Grand January: Compete for £10,000 with your fantasy team this weekend💰

Mohamed Salah tops the bookmakers’ attacking estimations with a 56% chance of scoring this weekend when Crystal Palace visit Anfield. The effervescent Egyptian is in red-hot form, with 5 double-digit hauls in his last 7 outings, scoring 7 times and assisting a further 3 over that stretch. And with Roy Hodgson’s men having conceded 2 or more goals in 7 of their 11 away games this season, things look bright for our captain.

With Harry Kane injured and uncertainty over the Manchester City striker’s berth, we harvest the value on offer in midfield and play a 3-5-2 formation.

That sees Manchester City duo Raheem Sterling (50%) and Leroy Sane (43%) make our starting XI ahead of their plum trip to managerless Huddersfield. The Terriers have lost 4 on the bounce at home, conceding an average of 2 goals per game, whilst City are on a 5 game win streak in all competitions, bagging an impressive 24 goals in that time. Sterling has 3 assists in his last 3 games, whilst Sane has a goal and an assist in his last 2, but it appears both players have the potential to explode this Sunday given the turmoil their opponents find themselves in.

Anthony Martial (45%) and Xherdan Shaqiri (43%) complete our midfield. United’s French forward is in good long term goalscoring form, with 8 strikes in his last 11 Premier League starts, and hosts a Brighton outfit with just a solitary away clean sheet this campaign. The selection of Shaqiri sees us double up on the Liverpool attack. With goals expected for the Reds at Anfield, the Swiss international will be looking to add to the 6 goals and 4 assists he has recorded in his debut season for Jurgen Klopp’s outfit.

The 2 spots up front in our starting XI are filled by Manchester United prodigy Marcus Rashford (42%) and Harry Kane’s likely replacement Fernando Llorente (38%). Since Solskjaer took the reins at Old Trafford, Rashford has scored 4 times, and set up another 2, in 5 gameweeks, making him the most in-form forward (excluding the injured Kane) in the game. A home game against Brighton offers him the chance to continue his hot streak as we double up on the United attack. Llorente, meanwhile, has scored in each of his last starts for the Lilywhites (both in domestic cup action), including a hattrick against Tranmere a couple of weeks ago. He travels to Fulham on Sunday afternoon, with the Cottagers in possession of the worst rearguard in the top flight – no side has conceded more than their 49 goals.

Danny Ings (38%), who has scored 7 goals this season in just 1060 minutes (the equivalent of 11.8 games) takes the first spot on our bench. He is expected to return from injury this weekend at home to an Everton side with 1 clean sheet in their last 9 attempts. 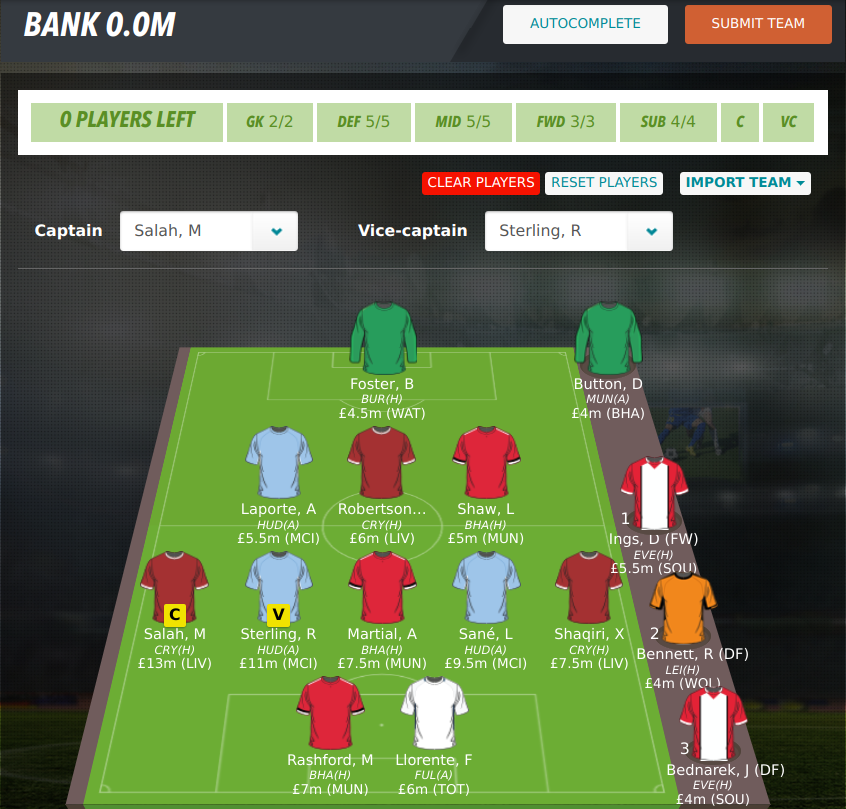