TRY DAILY FANTASY FOR FREE THIS MIDWEEK. COMPETE FOR £100 IN CASH PRIZES!

The Premier League returns midweek with a full set of fixtures across Tuesday and Wednesday, and here at FantasyBet we continue to give you the chance to win big, with our Grand Tuesday and Grand Wednesday competitions offering you £1000 guaranteed prize pools for just an £11 entry fee!

Before taking a look at the bookmakers’ odds from across the internet to analyse the relevant clean sheet and anytime goalscorer markets for Gameweek 24, we quickly review how the Bookies’ Advantage picks performed last time out … 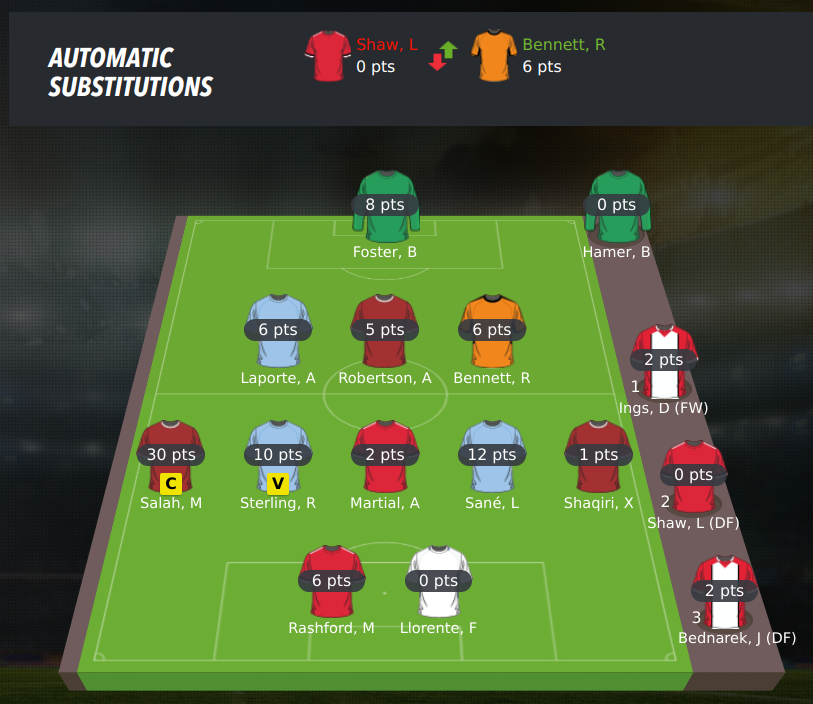 Our squad scored a bumper 86 points in Gameweek 23, with captain Mohamed Salah’s monster 30 point haul topping the bill. Manchester City duo Leroy Sane (12) and Raheem Sterling (10) also contributed with double-digit returns, whilst our defence triumphed; Ben Foster (8) and Aymeric Laporte (6) kept clean sheets, with Ryan Bennett (6) and Andrew Robertson (5) providing a goal and an assist respectively. Marcus Rashford (6) also continued his recent good form with another strike in Manchester United’s win over Brighton. On the other hand, a Fernando Llorente own goal and blanks from Anthony Martial and Xherdan Shaqiri meant we missed out on breaking the 100-point barrier.

Manchester City once again top the bookies’ defensive rankings having kept 6 clean sheets in a row in all competitions. They travel to St James’s Park to face Newcastle on Tuesday night, and are given a 55% chance of recording another shutout against the Magpies, who have blanked in 3 of their last 5 in front of their own fans in the top flight. Ederson offers the cheapest secure route into the Citizens’ rearguard and starts between the sticks for our squad.

Liverpool (53%) rank second ahead of their hosting of Leicester. The Reds have the tightest defence in the Premier League this season, and have only been breached 6 times in 11 games at Anfield. Andy Robertson is the highest scoring defender in the game (129 points), has chalked up 6 assists and accrued more bonus points (20) than any other player bar Pierre-Emerick Aubameyang. The Scotland captain makes our starting XI once again.

Manchester United (51%) and Arsenal (50%) complete the top 4 defensive prospects for Gameweek 24. The Red Devils continued their renaissance under Ole Gunnar Solskjaer with a 2-1 victory over Brighton last time out, and then beat Arsenal in the FA Cup on Friday to make it 8 wins in a row with the Norwegian at the helm. On Tuesday they entertain a Burnley side who have failed to net in both of their last 2 in all competitions. On the same night, Arsenal welcome Cardiff, who have scored a league-low 6 goals on the road this season, to The Emirates. Left backs Luke Shaw and Sead Kolasinac provide the best value routes into their respective defences, along with some attacking threat (especially in the case of Kolasinac, who has 4 assists to his name this term), and make our starting XI.

On our bench, David Button (29%) offers us a £4.0m goalkeeping option for possibly one more gameweek, with Matt Ryan on his way back from the Asian Cup, whilst Ryan Bennett (36%) and Jan Bednarek (33%) provide superb options in defence at the same price point. This gameweek they host West Ham and Crystal Palace respectively.

Mohamed Salah tops the bookmakers’ attacking estimations with a 60% chance of scoring on Wednesday when Leicester visit Anfield. The effervescent Egyptian is in red-hot form, with 6 double-digit hauls in his last 8 outings, scoring 9 times and assisting a further 3 over that stretch. And with Claude Puel’s men having conceded 4 at Wolves in Gameweek 23, things look bright for our captain.

Pierre-Emerick Aubameyang (59%) just trails Salah ahead of his plum home game against Cardiff. The Gabonese international has 5 goals and 3 assists in his last 5 Premier League outings in front of his own fans, whilst he also netted in Arsenal’s FA Cup loss to Manchester United on Friday. With the Bluebirds in possession of the second leakiest defence in the division (44 goals conceded), Aubameyang’s owners could be in for a bumper return on Tuesday evening.

The in-form Marcus Rashford (50%) and Danny Ings (38%) complete our strike force for Gameweek 24. Manchester United’s prodigy has scored in each of his last 4, and will look to continue his hot streak against a Burnley side that were beaten 5-0 by Manchester City on Saturday, whilst only Fulham and Bournemouth have conceded more on their travels in the Premier League this season (22 away goals conceded by the Clarets). Ings, meanwhile, hosts Crystal Palace, who he bagged against back in September when the Saints won 2-0 at Selhurst Park. With the Eagles being breached 12 times in their last 5 on the road, Ings offers Fantasy managers an enticing cheap front-line option.

Joining Salah in our midfield is Manchester City’s Raheem Sterling (47%), who has a goal and 3 assists in his last 4 appearances, with significant rests during the Citizens’ recent cup games reducing his risk of rotation this gameweek. A trip to Newcastle, who have uncharacteristically conceded 2 or more in 3 of their last 5 at home in the top flight, bodes well for Sterling, who also netted against the Magpies in the reverse fixture earlier this season.

Paul Pogba (44%) and Diogo Jota (36%) complete our starting XI. United’s World Cup winner is another one of their rejuvenated assets, with 5 goals and 5 assists in the league under Solskjaer. He forms a double up on the Red Devils’ attack for our squad ahead of their Old Trafford clash with Burnley. Over at Molineux, Jota’s hattrick against Leicester last Saturday brought him back onto Fantasy radars. Could he finally live up to the pre-season hype that surrounded him? A home game against West Ham, who crashed out of the FA Cup 4-2 to League One AFC Wimbledon at the weekend, gives him a great chance to build some consistency.

The first spot on our bench is taken by Victor Camarasa (11%). An away game at Arsenal will no doubt be tough, but with penalty duties in his locker, the Spaniard continues to offer superb value in the budget midfielder category. 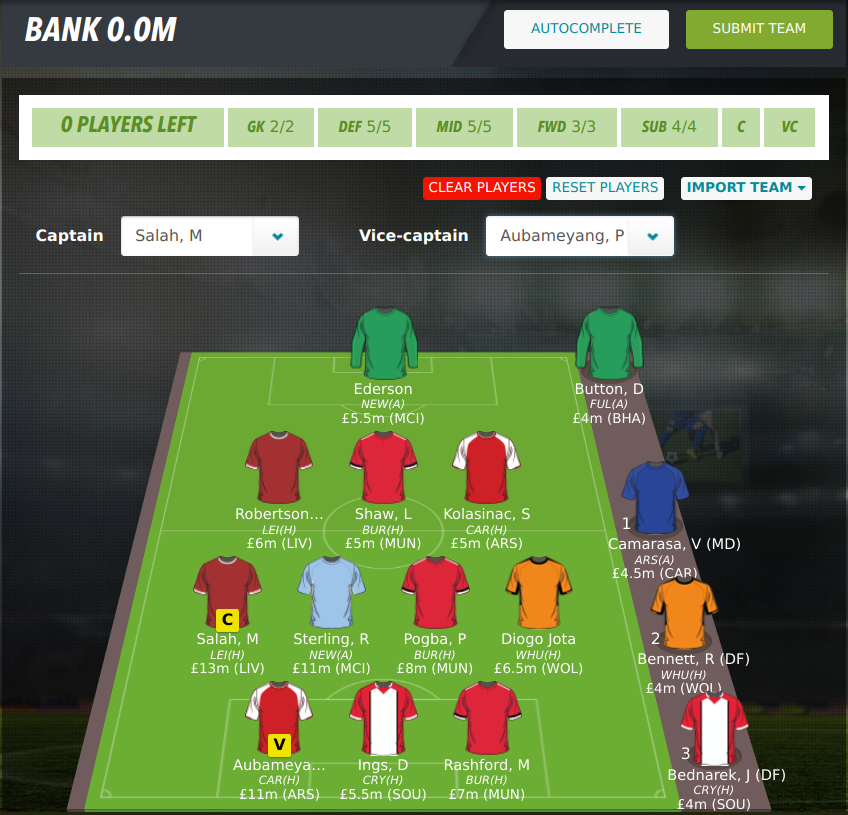