TRY DAILY FANTASY FOR FREE THIS WEEKEND. JOIN OUR FREEROLL AND COMPETE FOR £100 IN CASH PRIZES!

The first double gameweek of the season is upon us!

Everton and Manchester City both feature twice, with the Toffees hosting Wolves on Saturday and the champions welcoming Arsenal to The Etihad on Sunday. The two sides then face off at Goodison Park on Wednesday evening. With a double gameweek comes the chance of serious points, so expect assets from both sides to feature highly on fantasy managers’ wishlists. It should be noted that the odds for the Everton vs Manchester City game are not yet available, so they have been estimated in order to give a best guess as to true clean sheet and anytime goalscorer probabilities for Gameweek 25.

With our Triple Grand and Grand Weekend games offering £3,000 and £1,000 guaranteed prize pools for £33 and £11 buy-ins, respectively, gaining any and every edge over your rivals is of the utmost importance, so read on as we analyse the clean sheet and anytime goalscorer markets to help you with your team and captaincy selections…

Manchester City and Chelsea share top spot in the bookies’ defensive rankings with 64% chances of keeping clean sheets in Gameweek 25. The Citizens’ double header looks most likely to be profitable when they travel to Everton, given the Toffees have blanked or scored only once in 4 of their last 5 outings. That being said, they did shutout Arsenal (their other opponents) on the opening day of the season. Chelsea, meanwhile, entertain a Huddersfield side without a goal in any of their last 4 in all competitions. Aymeric Laporte and David Luiz represent secure routes into their respective defences and make our starting XI.

Tottenham (51%) rank third ahead of their early kick off on Saturday against Newcastle. Despite conquering the champions on Tuesday, Rafa Benitez’s side have been poor on the road this term, bagging just 9 goals in 11 games – only the 3 promoted sides have scored fewer. That, coupled with the fact that Spurs have the third best home defence so far this season (10 goals conceded in 10 games), sees us plump for the services of Hugo Lloris between the sticks.

Completing the top 4 defensive prospects for Gameweek 25 are Liverpool (45%). The league leaders travel to London on Monday night to tackle West Ham, who have blanked 3 times in their last 5 top flight outings, scoring only 3 goals over that run. Andy Robertson is the highest scoring defender in the game (131 points), has chalked up 6 assists and accrued more bonus points (20) than any other player bar Pierre-Emerick Aubameyang. The Scotland captain makes our starting XI once again.

On our bench, Julian Speroni (39%) is unlikely to see any action, but we have now returned to a situation where none of the £4.0m goalkeepers are anyway, whilst Aaron Wan-Bissaka (39%) and Jan Bednarek (30%) provide superb options in defence at the same price point. This gameweek they host Fulham and travel to Burnley respectively.

With a double gameweek ahead of him, it is no surprise to see Sergio Aguero topping the bookies’ attacking estimations. The Argentine striker, who is given a 79% chance of finding the net against Arsenal and Everton, has an attacking return in each of his last 5 starts (3 goals, 2 assists) and dons our captain’s armband.

Joining Aguero up front for our squad are Gonzalo Higuain (55%) and Fernando Llorente (43%). Chelsea’s new hitman won’t have many better chances to open his account for the club than a home game against Huddersfield, who are rock-bottom and have kept a solitary clean sheet in their last 13 attempts. Llorente, meanwhile, produced a goal and an assist against Watford on Wednesday night, and will be looking to rack up more points when Newcastle visit Wembley for Saturday’s early kick off.

Manchester City’s Raheem Sterling (73%) headlines our midfield. The diminutive winger has a goal and 3 assists in his last 5 appearances, and enjoyed significant rests during the Citizens’ recent cup games, which enhance his chances of starting both double gameweek fixtures. Both Arsenal and Everton have proven multiple times over the course of the season that their defences are far from solid, so Sterling joins Aguero in a City attacking double-up for our squad.

Also having their prospects boosted by a pair of fixtures are Everton duo Richarlison (53%) and Gylfi Sigurdsson (44%). A home game against Wolves, who are without an away shutout since October (7 games) precedes their hosting of Manchester City, who looked shaky at the back in their 2-1 defeat to Newcastle on Tuesday. The pair have scored 109 and 114 points respectively so far this term, highlighting the great value they offer. With Sigurdsson, who is in charge of set pieces, scoring as recently as Gameweek 23 and Richarlison netting last time out against Huddersfield, Marco Silva’s two main men start for our side.

Completing our starting XI is Liverpool’s Sadio Mane (38%). The Senegalese flyer has now scored in each of his last 2 games, and a trip to West Ham, who have been breached 9 times in their last 3 games in all competitions, including 4 against AFC Wimbledon in the FA Cup, offers him the perfect platform to continue his recent upturn in form.

The first spot on our bench is taken by Victor Camarasa (18%). With penalty duties in his locker, the Spaniard continues to offer superb value in the budget midfielder category. He welcomes Bournemouth to South Wales on Saturday. 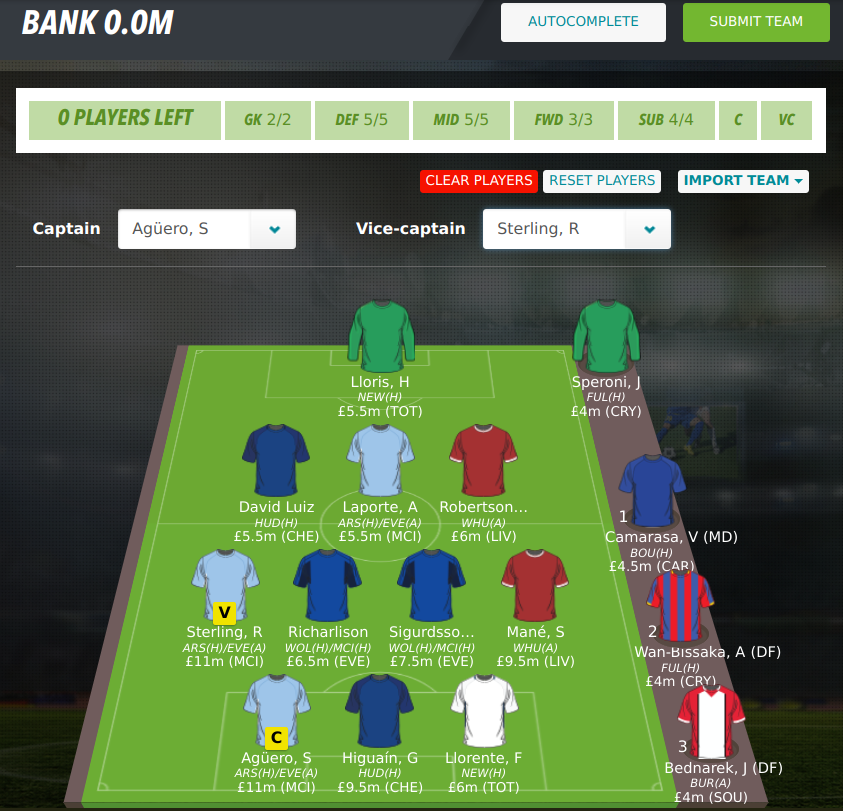