TRY DAILY FANTASY FOR FREE THIS WEEKEND. COMPETE FOR £100 IN CASH PRIZES!

The first double gameweek of the season may be behind us, but we still have a full complement of Premier League fixtures to look forward to this weekend, and you still have the chance to win big here at FantasyBet!

With our Triple Grand and Grand Weekend games once again offering £3,000 and £1,000 guaranteed prize pools for £33 and £11 buy-ins, respectively, gaining any and every edge over your rivals is of the utmost importance, so read on as we analyse the clean sheet and anytime goalscorer markets to help you with your team and captaincy selections…

Liverpool may no longer be top of the Premier League, but they are top of the bookies’ defensive rankings for Gameweek 26. A home game against Bournemouth sees the Reds afforded a 52% chance of keeping their 14th clean sheet of the season. Eddie Howe’s men have blanked in 4 of their last 5 on the road, so Andy Robertson, the highest scoring defender in the game (133 points), should be able to continue his stellar season on Saturday afternoon.

Wolves (48%) rank second ahead of their Monday night kick off against Newcastle. Last season’s Championship winners have only been breached once in their last 2 outings, and have consistently ranked highly in a number of defensive metrics throughout the campaign – Nuno Espirito Santo’s side have only conceded 28 big chances this season, trailing only Liverpool (27). Their opponents have failed to score in 2 of their last 3, so fantasy managers who invest in the Wolves back line could profit come Monday. Matt Doherty’s attacking prowess needs no introduction, but he served a well-timed reminder of his capability midweek in The FA Cup, scoring twice and setting up another as Wolves overcame Shrewsbury.

Completing the top 4 defensive prospects for Gameweek 25 are Southampton (44%) and Brighton (42%). The pair host Cardiff and Burnley respectively, who are both averaging under a goal per game on their travels this term. The Saints haven’t been too solid at the back, so we’ve opted for Jan Bednarek, who provided an assist last Saturday and often fares well in the BPS department. The Seagulls, meanwhile, have recorded 2 shutouts in their last 3 in front of their own fans, so Matt Ryan starts between the sticks for our squad.

On our bench, David Button (42%) provides £4.0m cover should Ryan not feature, whilst Yan Valery (44%) and Aaron Wan-Bissaka (36%) provide superb options in defence at the same price point. They host Cardiff and West Ham, respectively, this weekend.

Mohamed Salah, our captain for Gameweek 26, tops the bookmakers’ attacking ranks with a 60% chance of netting against Bournemouth, who have the second worst away defence in the top flight (27 goals conceded). The classy Egyptian has hit 5 goals in 3 games against the Cherries, including a hattrick back in December, whilst 6 double-digit hauls in his last 10 outings underline his captaincy credentials.

Our vice-captain is Sergio Aguero (50%). The Argentine has sparkled at The Etihad this season, with 11 of his 14 Premier League goals, including both of his hattricks, coming at home. That bodes well for his owners this weekend, as he welcomes an inconsistent Chelsea side to Manchester. The Blues have lost their last 2 away games, with their 4-0 thrashing at Bournemouth last Wednesday a real cause for concern.

Joining Aguero up front for our squad are Marcus Rashford (44%) and Alexandre Lacazette (43%). Manchester United’s prodigy was on target again last weekend at Leicester, and has now notched 6 goals in 8 games under Ole Gunnar Solskjaer. Lacazette, meanwhile, has scored 3 in his last 5 outings. On Saturday, the pair travel to Fulham and Huddersfield respectively, who possess two of the worst home defences in the top flight – the Whites have conceded 23 in front of their own fans, whilst the Terriers have been breached 20 times.

Ahead of their plum home game against Bournemouth, we opt for a Liverpool double-up in midfield with the selection of Sadio Mane (47%). After netting against West Ham on Monday night, the Senegalese flyer has now scored in each of his last 3 games, so he joins Salah in our starting XI.

Another form midfielder is Heung-Min Son (45%). The South Korean menace has been on target 10 times, and provided 6 assists, in his last 12 top flight appearances for Spurs, including 2 in 2 since returning from The Asian Cup. A Wembley clash with Leicester, who conceded 4 at Wolves recently (Gameweek 23), offers him the platform to continue his hot streak.

Completing our midfield and starting XI is Watford’s Gerard Deulofeu (29%). The silky Spaniard has been playing OOP up top for the Hornets, and will be looking to add to the 3 goals he has scored this season against an out-of-sorts Everton side who have only kept 2 clean sheets on their travels this term (12 games).

The first spot on our bench is taken by Pierre-Emile Hojbjerg (12%), as Cardiff’s Victor Camarasa remains an injury doubt. The powerful Dane has 3 goals and an assist to his name this campaign, a solid return for a £4.5m midfielder. A home game against the Bluebirds looks a promising fixture this Saturday. 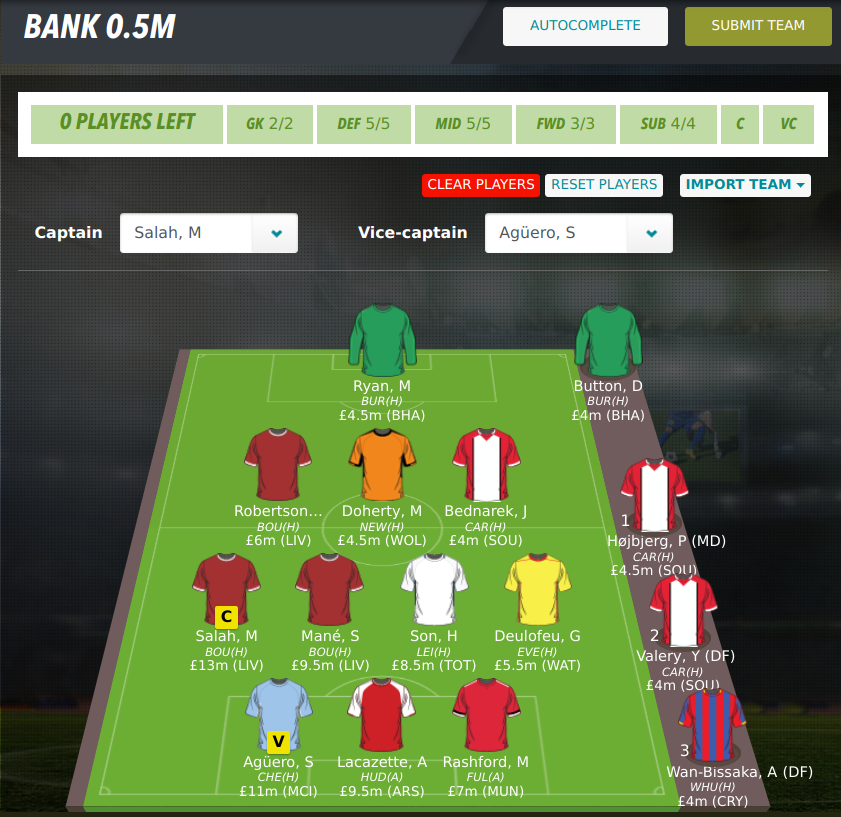