The Champions League returns midweek with the first legs of four of the round of 16 fixtures taking place over the course of Tuesday and Wednesday. Here at FantasyBet we have a range of games for you to get involved in, including our £500 Guaranteed Tuesday Main Event, with entry costing just £11! As per usual, we’ve analysed the clean sheet and anytime goalscorer markets from bookmakers across the internet in order to help you gain that all-important edge over your competitors…

Don't miss our Champions League Freeroll today! We give away £100 in cash prizes

Roma are the side best placed to keep a clean sheet in Gameweek 7 according to the bookmakers, with a 34% chance of doing so when they welcome Porto to the Stadio Olimpico. Eusebio Di Francesco’s side recorded 2 shutouts in the Group Stage, and also won 3-0 at Chievo on Friday, whilst their opponents have found the net just once in their last 2 away games. With regular custodian Robin Olsen out injured, Antonio Mirante is set to deputise and offers fantastic value in goal at just £4.0m. He makes our starting XI.

Tottenham and Real Madrid (both 28%) rank joint-second ahead of their clashes with Borussia Dortmund and Ajax respectively. From a defensive perspective, both sides appear to have their work cut out on Wednesday night, with Dortmund and Ajax scoring freely of late, whilst neither Tottenham nor Real have been tight at the back either, keeping just 2 clean sheets in their last 12 games combined. Therefore, we recommend opting for defenders who pose an attacking threat, such as Kieran Trippier and Sergio Ramos. Spurs’ English right back has a goal and 5 assists to his name in the Premier League this season, whilst Madrid captain Ramos has struck an impressive 9 times in Spain (league and cup), with penalty duties significantly boosting his appeal.

Manchester United (26%) complete the top 4 defensive prospects for Gameweek 7 when they host PSG on Tuesday evening. The French Champions will be without Neymar and Edinson Cavani, significantly reducing the potency of their attack, whilst the Red Devils have kept 2 clean sheets in succession. Victor Lindelof offers a cheap and reliable route into the United back line, and also got on the scoresheet in his last outing at Old Trafford.

Don't miss our Champions League Freeroll today! We give away £100 in cash prizes

Karim Benzema tops the bookmakers’ attacking estimations for Gameweek 7 with a 44% chance of finding the net against Ajax on Wednesday. The French hitman is in a rich vein of form, having scored 6 goals in his last 6 matches for the Spanish giants. Opponents Ajax have been conceding heavily of late, including 6 against Feyenoord and 4 against Heerenveen, which sees us back Benzema with our captain’s armband.

Joining the Real striker up front in our starting XI are Edin Dzeko (41%) and Kylian Mbappe (36%). Dzeko, who has 5 goals in 4 Champions League appearances this season, has struck 3 times in his last 4 games for the Giallorossi. The Bosnian has also fired an average of 3 shots on target per game in the Champions League this term, a better ratio than any other player in the competition (4 games, 12 shots on target). Mbappe, meanwhile, has bagged 5, and provided 2 assists, in his last 5 outings for Thomas Tuchel’s outfit, and travels to Old Trafford on Tuesday, where Manchester United are yet to keep a clean sheet in the Premier League under Ole Gunnar Solskjaer.

In midfield, our 4 picks face off against each other on Wednesday evening.

First, at Wembley, Heung-Min Son (33%) and Marco Reus (31%) lock horns. Both are in red-hot form, the South Korean scoring in each of his 3 games for Tottenham since returning from The Asian Cup, whilst Dortmund’s Reus has 6 goals and 2 assists in his last 8 appearances. This looks likely to be a high-scoring affair; Dortmund are without a shutout in 7 games, whilst Mauricio Pochettino’s side have been breached in 4 of their last 5 at home, and also conceded 10 times in the group stages.

Then, over at the Amsterdam Arena, Lucas Vazquez (27%) and Hakim Ziyech (25%) go head to head. We have already touched upon Ajax’s recent defensive frailties, but Madrid have only kept a solitary clean sheet in their last 6, so goals also look to be on the agenda here, which bodes well for both players. Vazquez has the chance to build on 2 goals and an assist in his last 5, whilst Ziyech can continue his impressive season and form of late – over his last 10 games the Moroccan international has scored 8 times and assisted 5 more. Furthermore, Ziyech has had 11 shots on target in the Champions League this term, a statistic bettered by only 3 players (Dzeko, Lewandowski and Neymar).

Taking the first spot on our bench is Borussia Dortmund’s Jadon Sancho (23%). The former Manchester City starlet is enjoying a successful campaign over in North Rhine-Westphalia, with 7 goals and 9 assists to his name in 21 Bundesliga appearances (7 of which have come from the bench). With teammate Reus facing a late fitness test, we may need to call upon his services this gameweek, and at £5.0m he definitely represents value for money. 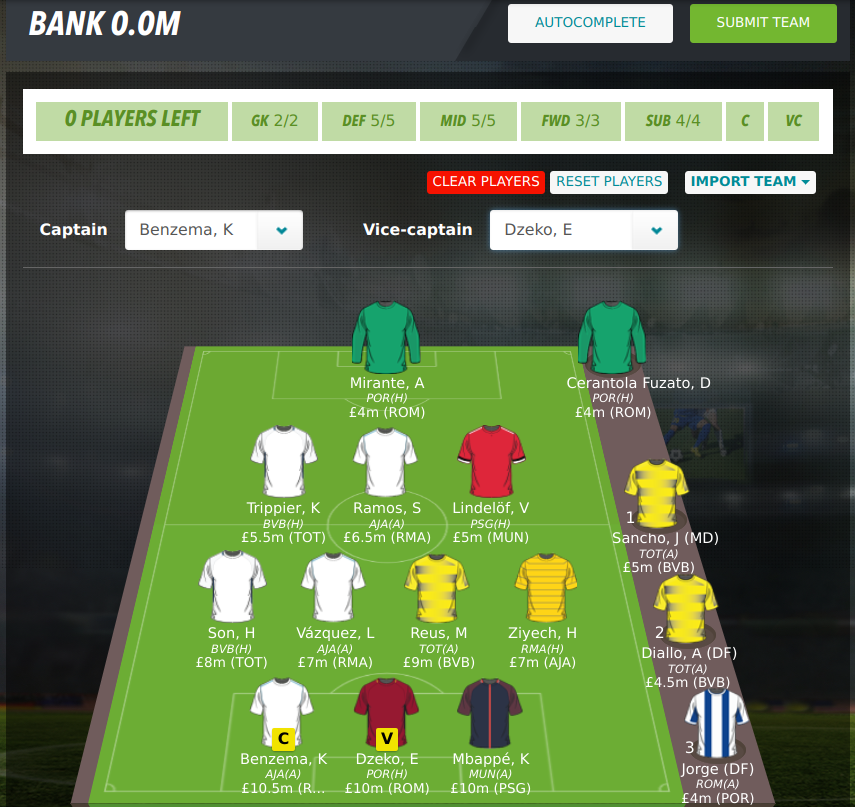