The Champions League returns midweek with the fifth round of group stage fixtures taking place over the course of Tuesday and Wednesday. Here at FantasyBet we have a range of games for you to get involved in, including our £1,000 UCL Grand Tuesday and £1,000 UCL Grand Wednesday competitions, so we’ve once again analysed the clean sheet and anytime goalscorer markets from bookmakers across the internet in order to help you gain that all-important edge over your competitors…

Atletico Madrid are the side best placed to keep a clean sheet in Gameweek 5 according to the bookmakers, with a 65% chance of doing so when they entertain Monaco in one of Wednesday’s early kick offs. Diego Simeone’s men have conceded just once at home in their 2 Champions League games so far, whilst Thierry Henry’s floundering side have only scored a single goal in their last 4 in all competitions. Lucas Hernandez provides a secure route into the Atletico defence at 5.5m and starts for our squad.

Napoli (64%) rank second ahead of their hosting of Red Star Belgrade. The Italians shutout their opponents in the reverse fixture back in September (a 0-0 draw), whilst they also kept a clean sheet against Liverpool to make it 2 in 4 in Europe’s premier competition. The Serbian champions, meanwhile, have failed to find the net in 2 of their 4 group games. Left back Mario Rui, who has started all 4 matches for the Naples side so far, provides outstanding value at just 4.0m and makes our starting XI.

European giants Manchester United (53%) and Bayern Munich (49%) complete the top 4 defensive prospects for this round of fixtures. Jose Mourinho’s men welcome Swiss outfit Young Boys, who they beat 3-0 in Switzerland in Gameweek 1, to Old Trafford on Tuesday evening. Half of United’s Champions League games this term have seen them keep clean sheets (2 out of 4), whilst their opponents have blanked in the same quantity. With 3 shutouts in 4 matches, and just a solitary goal conceded, Bayern seem to be leaving their domestic woes behind when it comes to continental action. Further defensive success in Tuesday’s home meeting with Benfica will see them qualify for the knockout stages. We plump for Luke Shaw and Manuel Neuer respectively, who offer a good mix of starting security, attacking and save point potential.

Our bench consists of cheap backup options, with Roma’s Robin Olsen (17%), who has established himself as first choice keeper at the capital club, available for a bargain £4.0m, whilst Dortmund’s Dan-Axel Zagadou (44%) and Yuto Nagatomo (30%) of Galatasaray provide options in defence at the same price point. The trio face Real Madrid at home, Club Bruges at home, and Lokomotiv Moscow away respectively.

Bayern’s favourable home clash with Benfica, who have conceded in every group game so far (6 goals in total), sees Robert Lewandowski installed as the likeliest player to score in, and our captain for, Gameweek 5. The Polish striker has a 63% chance of netting according to the bookies, having already bagged 4 in 4 in this season’s competition, including a brace last time out against AEK Athens.

Arkadiusz Milik and Paco Alcacer (both 51%) join Lewandowski up front for our squad. Milik has struck 5 times in 9 starts for Carlo Ancelotti’s side this term, and a visit from Red Star Belgrade, who have conceded a monstrous 10 goals in their 2 away games in the group stages, means he looks well positioned to profit on Wednesday evening. Alcacer, meanwhile, is in red-hot form having hit 11 goals in his last 10 outings for club and country. He hosts a Club Bruges outfit who have been breached 5 times in their last 2 Belgian Jupiler League matches.

Another man on fire at present is our midfield headliner Raheem Sterling (43%). The Manchester City star has 4 goals and 4 assists in his last 5 appearances for the Citizens. On Tuesday he travels to Lyon, who have conceded an average of 2 goals per game in their Champions League campaign. He is joined in our squad by Juventus’ Paulo Dybala (also 43%), who has 4 goals in the competition so far, a tally he’ll be confident of adding to at The Allianz Stadium against Valencia, who have been breached in 3 of their 4 matches in Group H.

Completing our starting XI are double-ups on the Napoli and Bayern attacks in the form of Jose Callejon (42%) and Arjen Robben (37%) respectively. Napoli’s Spanish midfielder has been a consistent provider this season, racking up 7 assists in all competitions, whilst the Bavarian giants’ flying Dutchman will be looking to add to the 3 goals he has scored in the Bundesliga this term.

Taking the first spot on our bench once again is Shaktar’s Taras Stepanenko (10%), who could provide exceptional value at just £4.5m given he has already scored twice domestically for the Ukrainian champions this season. A trip to Hoffenheim awaits him on Tuesday evening. 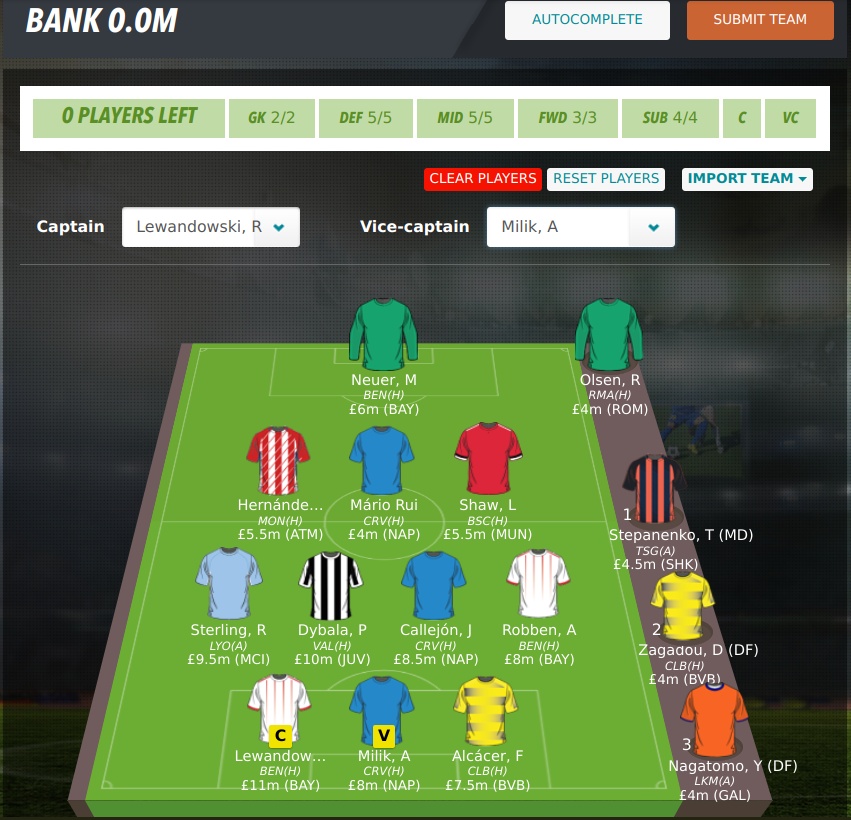 Good luck with your Champions League fantasy teams this midweek!